I finished scanning the whole stack of letters, and towards the end, I found a stack of letters stuffed into an envelope obviously not belonging to them. So by the date on the letter, this must be earlier than the rest, while Mary was at the Ogontz school in Pennsylvania. I guess maybe her father (or both parents) went out part way with her after the winter break?

I will work out a navigation index at some point. 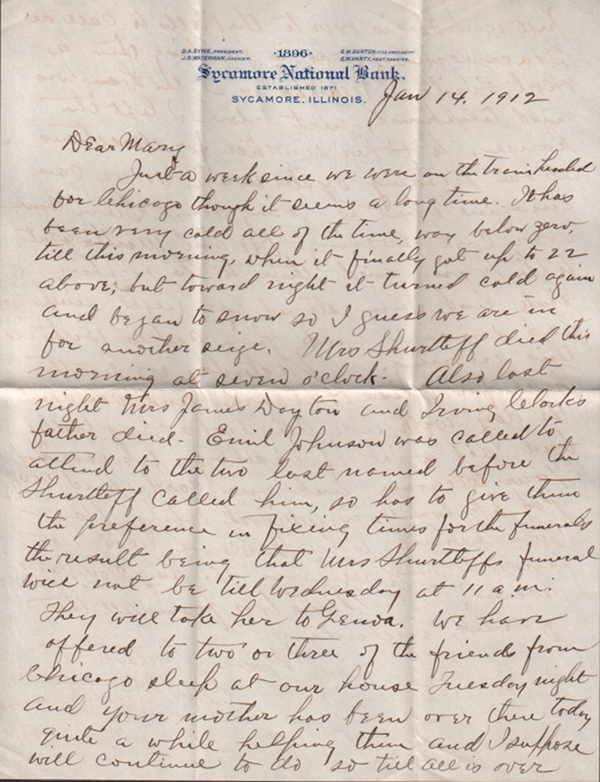 Just a week since we were on the train headed for Chicago though it seems a long time. It has been very cold all of the time, way below zero, till this morning, when it finally got up to 22 above, but toward night it turned cold again and began to snow so I guess we are in for another seige. Mrs Shurtleff died this morning at seven o'clock. Also last night Mrs James Dayton and Irving Clark's father died. Emil Johnson was called to attend the two last named before the Shurtleff called him, so has to give them the preference in fixing times for the funerals the result being that Mrs Shurtleffs funeral will not be till Wednesday at 11a.m.

They will take her to Genoa. We have offered to two of three of the friends from Chicago sleep at our house Tuesday night and your mother has been over there today quite a while helping them and I suppose will continue to do so till all is over.

I'm not sure what to make of the logistics described here, but I guess Mary isn't all that close to any of them. I can't place any of the deceased according to census data, except that there's several of each in the area on the 1910 census. 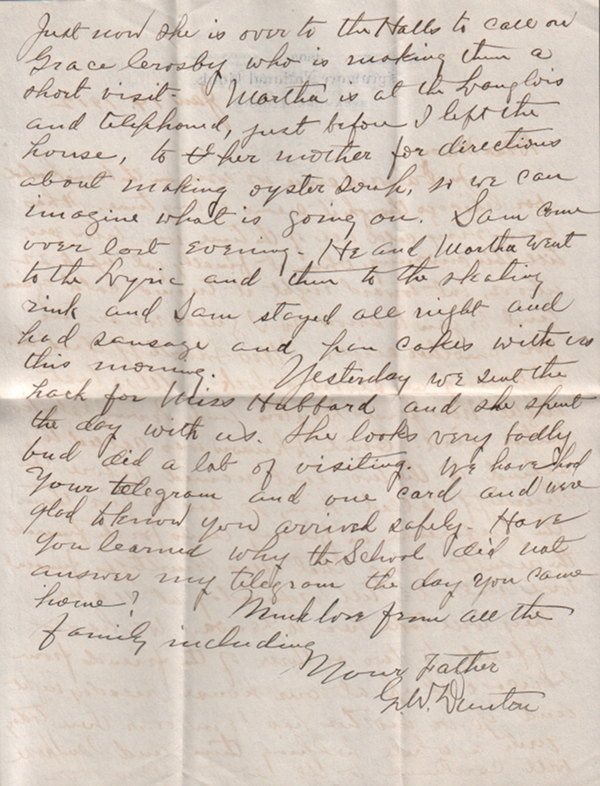 Just now she is over to the Halls to call on Grace Crosby who is making them a short visit. Martha is at the Langlois and telephoned, just before I left the house, to her mother for directions about making oyster soup so we can imagine what is going on. Sam came over last evening. He and Martha went to the Lyric and then to the skating rink and Sam stayed all night and had sausage and ham cakes with us this morning. Yesterday we sent the hack for Miss Hubbard and she spent the day with us. She looks very badly but did a lot of visiting. We have had your telegram and one card and were glad to know you arrived safely. Have you learned why the School did not answer my telegram the day you came home? Much love from all the family including
Your Father
G.W. Dunton

Mary's maternal grandmother's maiden name is Crosby, and there's little I know about them, but it sounds like Grace may be a relative.

We already know that the Hubbards are old and frail.