A letter from George Dunton, three days after the last, with a lot more detail on Lavinia's illness. 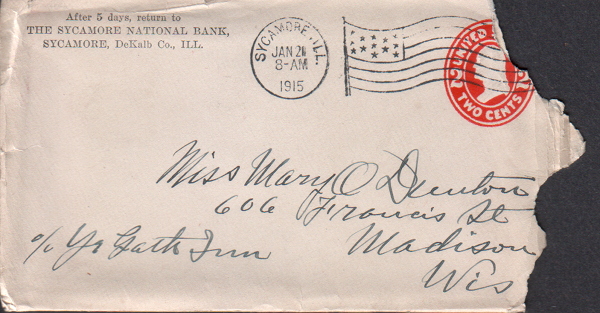 Your mother is and has been in a extremely nervous condition. She gets excited by trifles so small that it is hard to understand how any excitement can be produced, and things we say or do to give her mind a pleasant diversion or to entertain her sometimes produce an opposite effect, and some times while giving her pleasure at the time, later on produce a reaction that results in depression or loss of necessary sleep. To illustrate - this afternoon Martha attended her card club and on her return about 545 announced that at half past six she was going with the Townsends in a sleigh to De Kalb to meet Charles. I though she would be be pleased to know that Martha was to have this little outing, and in a way she was; nevertheless it stirred her up so that she could not sit quiet but had to go and lie on the bed and do a lot of talking about how it affected her, how she would probably be disturbed when Martha returned, and could hardly eat her supper. Last night Ellis came out, arriving at eight and going back this a.m. on the Sterling.

This is sounding rather neurotic. 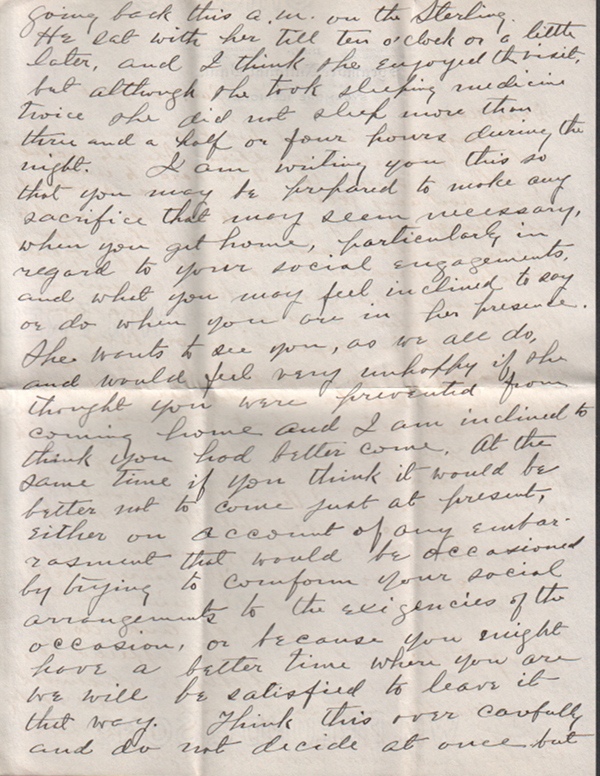 He sat with her till ten o'clock or a little later, and I think she enjoyed the visit, but although she took sleeping medicine twice she did not sleep more than three and a half or four hours during the night. I am writing you this so that you may be prepared to make any sacrifice that may seem necessary, when you get home, particularly in regard to your social engagements, and what you may feel inclined to say or do when you are in her presence.

She wants to see you, as we all do, and would feel very unhappy if she thought you were prevented from coming home and I am inclined to think you had better come. At the same time if you think it would be better not to come just at present, either on account of any embarrasment that would be occasioned by trying to conform your social arrangements to the exigencies of the occasion, or because you might have a better time where you are we will be satisfied to leave it that way.

Well, forewarned is forearmed, huh, Mary? The family doctor not only tends to the dog when the dog is ill, but is expected to sit up all night with Lavinia's nerves?

Think this over carefully and do not decide at once but on Friday as early in the day as convenient call me up on the phone and let me know what your conclusion is and if I get any new light on the problem by that time I can tell you. Ellis assures us that she will come out of this all right, but it is a tedious process and we have to exercise lots of patience.

I have procured from Dr Jugals the prescription for your nasal spray and can send it to you if you want it.

Love from your father
G.W. Dunton

I'm impressed that George uses such a light touch in laying down his expectations for Mary; she is never lacking for an escape route.