George writes again, and is still deep into information control and working around the sick Lavinia. 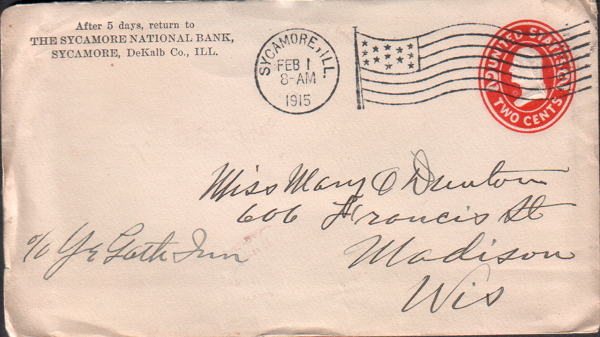 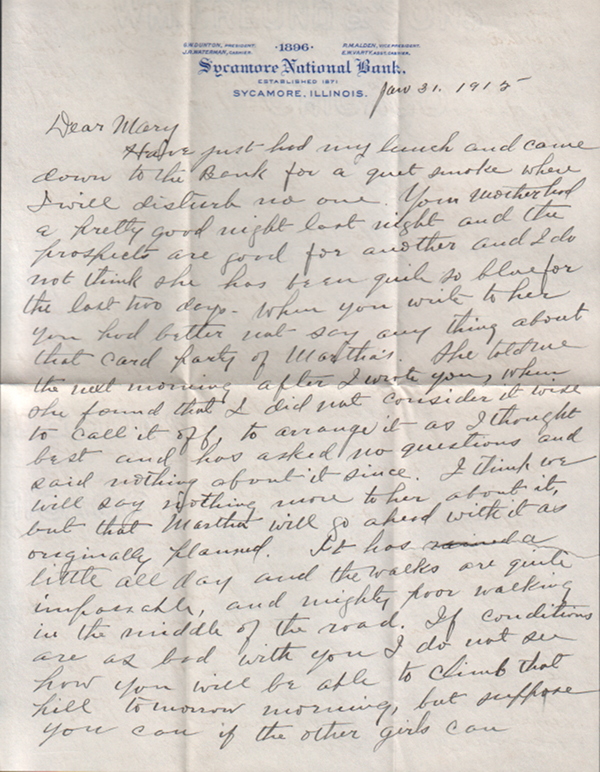 Dear Mary
Have just had my lunch and came down to the Bank for a quiet smoke were I will disturb no one. Your mother had a pretty good night last night and the prospects are good for another and I do not think she has been quite so blue for the last two days. When you write to her you had better not say any things about that card party of Martha's. She told me the next morning after I wrote you, when she found that I did not consider it wise to call it off to arrange it as I thought best and has asked no questions and said nothing about it since. I think we will say nothing more to her about it, but that Martha will go ahead with it as originally planned. It has rained a little all day and the walks are quite impassable, and mighty poor walking in the middle of the road. If conditions are as bad with you I do not see how you will be able to climb that hill tomorrow morning, but suppose you can if the other girls can.

He seems to be following orders not to upset Lavinia, but also not curtailing Martha particularly. A delicate line, I'm sure. 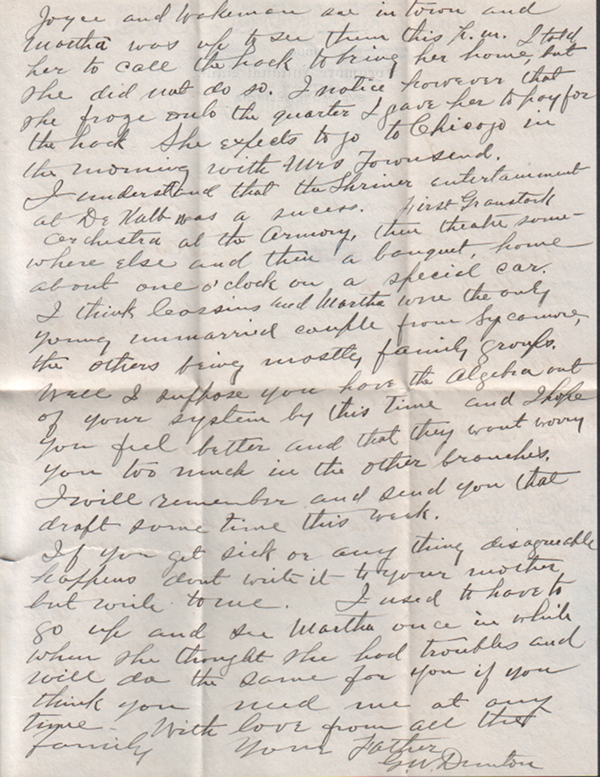 Joyce and Wakeman are in town and Martha was up to see them this p.m. I told her to call the hack to bring her home, but she did not do so. I notice however that she froze onto the quarter I gave her to pay for the hack. She expects to go to Chicago in the morning with Mrs. Townsend.

I understand that the Shriner entertainment at De Kalb was a success. First Granstorld Orchestra at the Armory, then theater somewhere else and then a banquet, home about one o'clock on a special car.

I think Cassins and Martha were the only young unmarried couple from Sycamore, the others being mostly family groups.

Well I suppose you have the algebra out of your system by this time and I hope you feel better and that they won't worry you too much in the other branches.

I will remember and send you that draft some time this week.

If you get sick or any thing disagreeable happens don't write it to your mother but write to me. I used to have to go up and see Martha once in while when she thought she had troubles and will do the same for you if you think you need me at any time. With love from all the family.
Your father
G.W. Dunton

If holding onto her fare and walking is Martha's little act of rebellion, George doesn't seem to mind very much.  He's so relentlessly nice.