George Dunton seems to be in fine form. 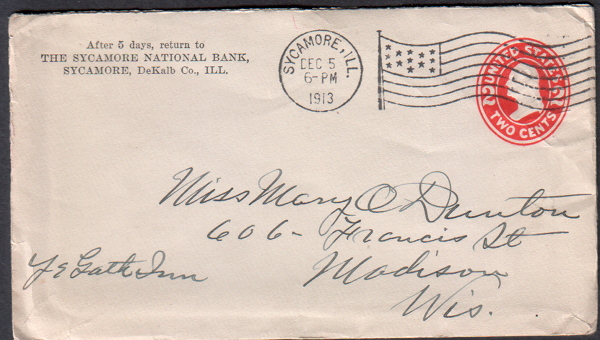 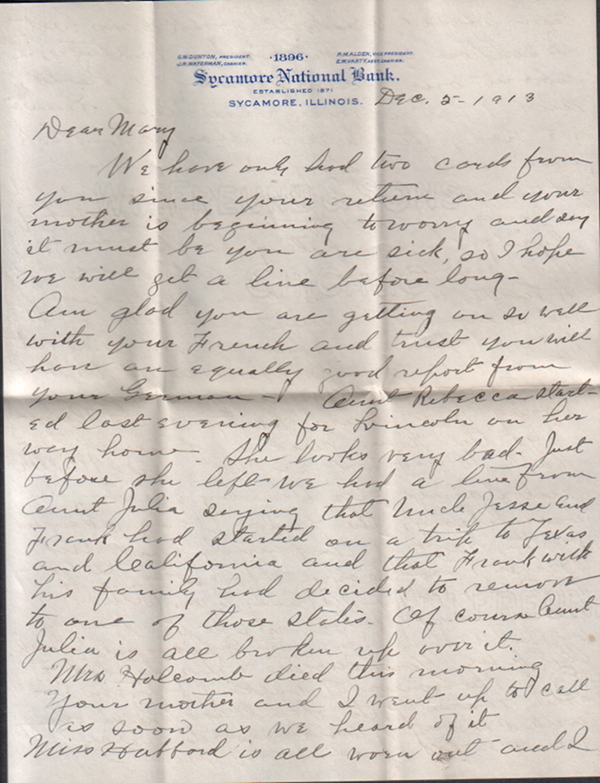 We have only had two cards from you since your return and your mother is beginning to worry and say it must be you are sick, so I hope we will get a line before long. Am glad you are getting on so well with your French and trust you will have an equally good report from your German. Aunt Rebecca started last evening for Lincoln on her way home. She looks very bad. Just before she left we had a line from Aunt Julia saying that uncle Jesse and Frank had started on a trip to Texas and California and that Frank with his family had decided to remove to one of those states. Of course aunt Julia is all broken up over it.

Mrs Holcomb died this morning. Your mother and I went up to call as soon as we heard of it. Miss Hubbard is all worn out and I am afraid she will break down next.

Aunt Rebecca (Rebecca Denton Harlow) lives in Denver Colorado, so possibly the Lincoln is Lincoln Nebraska. Aunt Julia (Julia Denton Viele) lives in Stevens Creek, Nebraska. Census corroborates that her husband is Jesse, and Karen's account covers the fates of her three oldest sons (Ralph, Frank and Fred) "One by one they'd trickle thru Denver, work in Father's shop awhile and then drift on to California where they found their spiritual home. They were nearly as old as my father so I remember them when I was a little girl--bores and spongers, all of them." Karen is somewhat warmer on the subject of her youngest son, Gus.

We had warning in the last letter about Mrs. Holcomb; she was almost 70, and this does not seem to be unexpected. 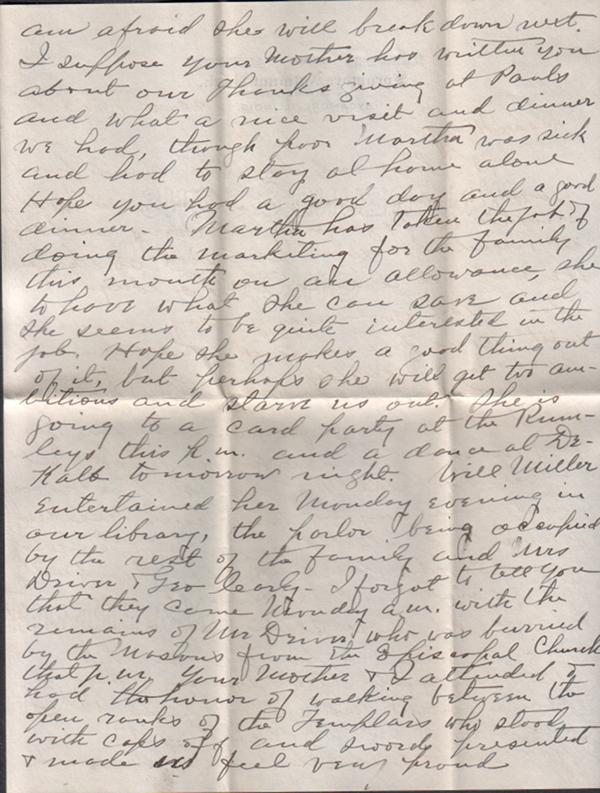 I suppose your mother has written you about our Thanksgiving at Paul's and what a nice visit and dinner we had, though poor Martha was sick and had to stay at home alone.

Hope you had a good day and a good dinner. Martha has taken the job of doing the marketing for the family this month on an allowance, she to have what what can save and she seems to be quite interested in the job. Hope she makes a good thing out of it, but perhaps she will get too ambitious and starve us out. She is going to a card party at the Rumleys this p.m. and a dance at De Kalb tomorrow night. Bill Miller entertained her Monday evening in our library, the parlor being occupied by the rest of the family and Mrs. Driver + Geo Carly I forgot to tell you that they came Monday a.m. with the remains of Mr Driver who was burried by the Masons from the Episcopal Church that p.m. Your mother + I attended + had the honor of walking between the open ranks of the Templars who stood with caps off and sword presented + made us feel very proud. They went home Tuesday night.

I don't have a picture of how housework is divided up; we did catch a mention of Lavinia canning peaches earlier, but this is about the second mention of someone doing the routine work of keeping house.

Masons! Well, this is all more interesting than the usual talk of train schedules and golf games. 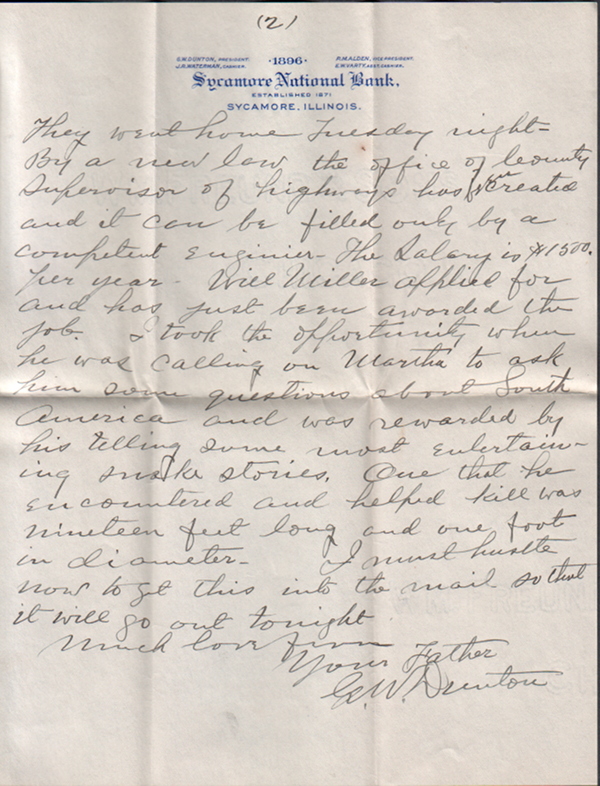 By a new law the office of county Supervisor of highways has been created and it can be filled only by a competent engineer. The salary is $1500. per year. Will Miller applied for and has just been awarded the job. I took the opportunity when he was calling on Martha to ask him some questions about South America and was rewarded by his telling some most entertaining snake stories. One that he encountered and helped kill was nineteen feet long and one food in diameter. I must hustle now to get this into the mail so that it will go out tonight.
Much love from
Your Father
G.W.Dunton

Census records find us a William Miller, born in 1888, who is actually listed as "Supervisor Highway, County" on the 1920 census. He's also married to Florence by 1920.

Also tucked into the envelope is a scrap of lined paper, perhaps Mary's reading list.

After discussion with my mother, some more detail on this note:

Mary is evidently studying Medieval Civilization; Robinson is probably one of the books by James Harvey Robinson, 1863-1936. Boniface is famous as the founder of the monastery of Fulda. He was killed by some unregenerate pagans in Frisia. He was made a special archbishop by the pope of the day, and told to organize the church in Germany. (He was born with a proper Anglo-Saxon name, but the pope renamed him Boniface.)