I'm going to start in the middle here, and fill in some of the backstory later, but I have in my possession (via the legwork and research of a very kind stranger) a package of letters written to my paternal grandmother's cousin.  Mary Denton Dunton would have been born in about 1893, and the package contains letters written to her from both parents (Lavinia Starr Denton Dunton and George William Dunton), and several friends.  I've started to scan them all; the dates initially suggested that I might be able to do a blog project of posting each of them 100 years after it was written, but in actual fact, the pacing doesn't seem like it will quite work for that. 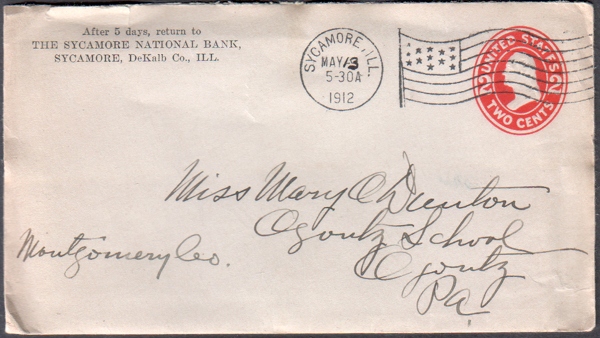 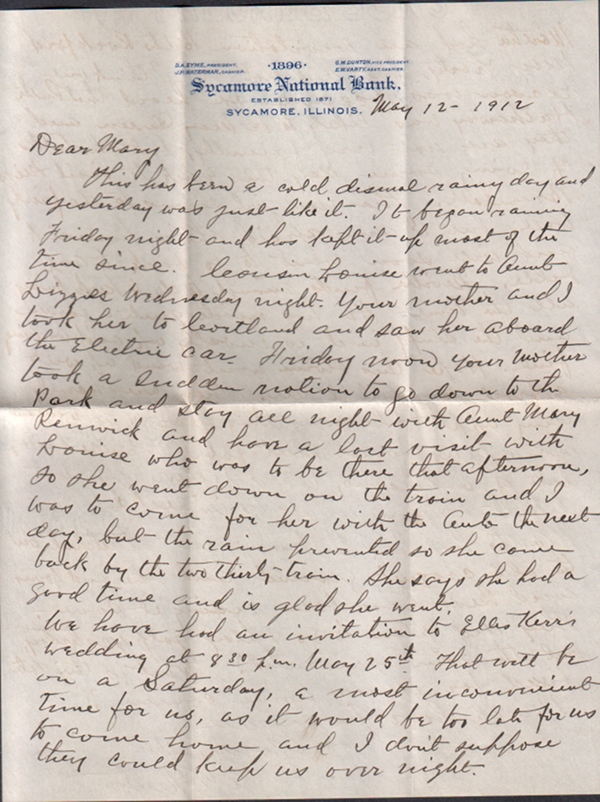 This has been a cold dismal rainy day and yesterday was just like it. It began raining Friday night and has kept it up most of the time since.  Cousin Louise went to Aunt Lizzies Wednesday night. Your mother and I took her to Cortland and saw her aboard the electric car.  Friday noon your mother took a sudden notion to go down to the park and stay all night with Aunt Mary Renwick and have a last visit with Louise who was to be there that afternoon, so she went down on the train and I was to come for her with the Auto the next day, but the rain prevented so she came back by the two thirty-train.  She says she had a good time and is glad she went.

We have had an invitation to Ella[?] Kerr's wedding at 830 p.m. May 25th.  That will be on a Saturday, a most inconvenient time for us, as it would be too late for us to come home and I don't suppose they could keep us over night. 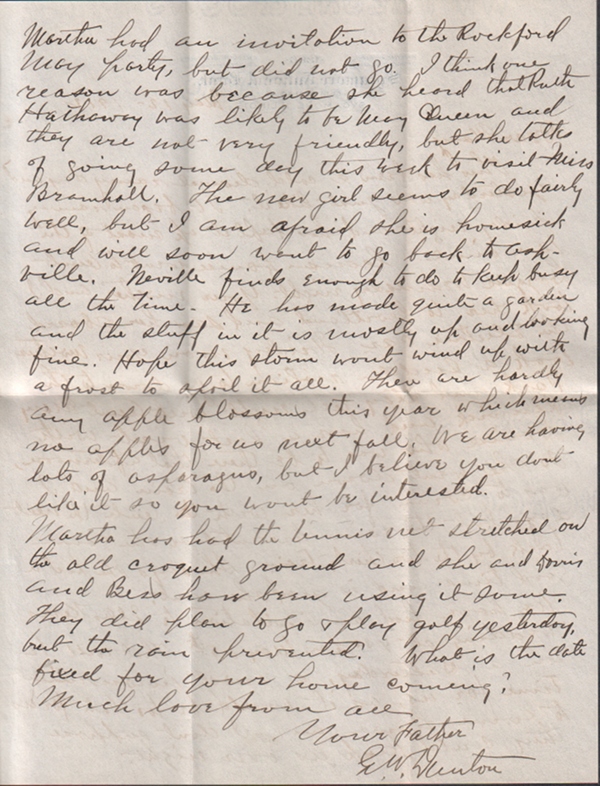 Martha had an invitation to the Rockford May party, but did not go.  I think one reason was because she heard that Ruth Hathoway was likely to be May Queen and they are not very friendly, but she talks of going some day this week to visit Miss Bramhall. The new girl seems to do fairly well, but I am afraid she is homesick and will soon want to go back to Oak[Ash?]ville. Neville finds enough to do to keep busy all the time. He has made quite a garden and the stuff in it is mostly up and looking fine. Hope this storm wont wind up with a frost to kill it all. There are hardly and apple blossoms this year which means no apples for us next fall. We are having lots of asparagus, but I believe you don't like it so you wont be interested.

Martha has had the tennis net stretched out the old croquet ground and she and Dorris and Bess have been using it some. This did plan to go play golf yesterday, but the rain prevented.  What is the date fixed for your home coming?

Much love from all

[Edited to correct Lizzie's relationship] I have corroboration for who the aunts are; Mary Denton Renwick and Lizzie Denton Howard are Lavinia's sisters, according to my grandmother's written account, which mentions that Mary Renwick has two daughters who are almost a generation older than Mary/Martha/Karen, but does not name them.  Perhaps one of these is Louise?  Lizzie has two boys, Gilbert and Jesse.

Later letters name "the new girl" and Nevill who seem to be household help.  Martha is Mary Dunton's older sister. I can't make out the names used at the end.

Is an electric car a tram of some sort?

I vote for Ashville - the h/k resembles the other H's much more than the other K's.
The p's are interesting.

The other placenames have been made easier by consulting a map; there's a closer Oakville than Ashville, to Sycamore IL, but in context, it's clearly an inconvenient distance away.  Might their maid be coming form Ashville Ohio?