A letter from George, with a newspaper clipping enclosed. 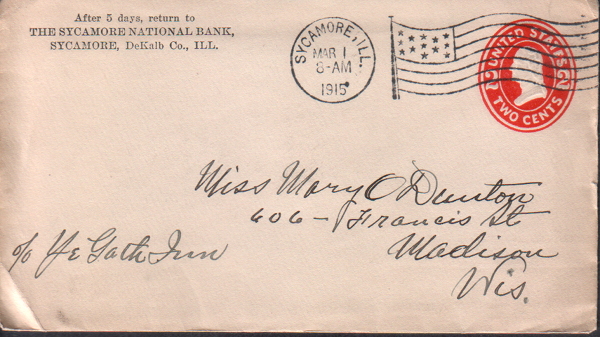 Dear Mary, Your mother sends the enclosed clipping and says you knew the people in St Petersburg and thinks you will be interested. Not much change with her - She was ordered to take castor oil three mornings in succession and began this morning. It's pretty tough on her and I might add on the rest of us too, as however beneficial it may be in the end it doesn't make her any more pleasant to get along with in the mean time. Martha went to Rockford with Charles last evening. She expected to stop with some of her friends

Clipping below. We had social connections in St Petersburg Florida before, and Woodlawn (where they're cited as living) is a good 300 miles from Sycamore. 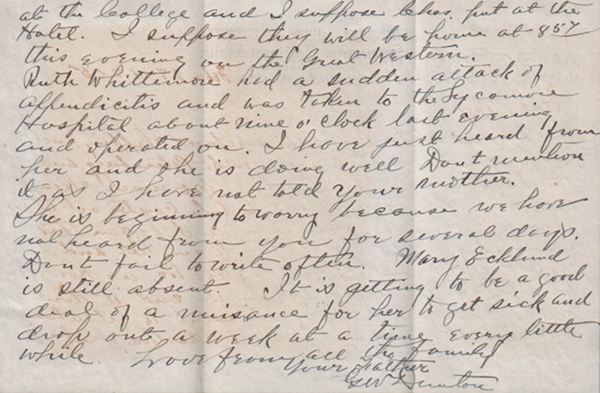 at the College and I suppose Chas but at the Hotel. I suppose they wil be home at 857 this evening on the Great Western. Ruth Whittemore had a sudden attack of appendicitis and was taken to the Sycamore Hospital about nine o'clock last evening and operated on. I have just heard from her and she is doing well. Don't mention it as I have not told your mother. She is beginning to worry because we have not heard from you for several days. Don't fail to write often. Mary Ecklund is still absent. It is getting to be a good deal of a nuisance for her to get sick and drop out a week at a time ever little while.
Love from all the family
Your father G W Dunton

Ah, more information control, but this one doesn't seem unreasonable. 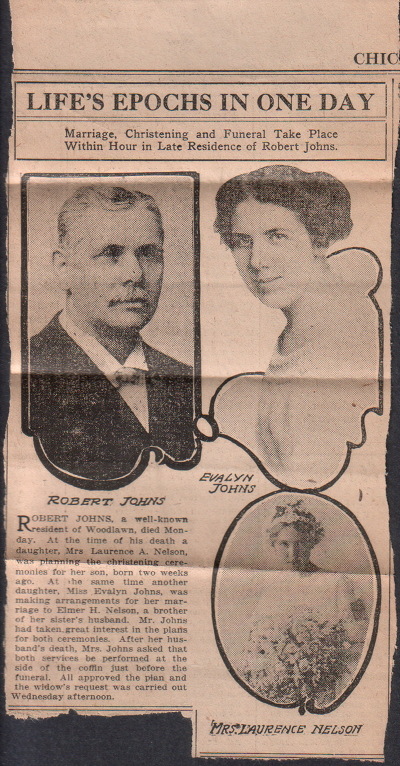 Robert Johns, a well-known resident of Woodlawn, died Monday. At the time of his death a daughter, Mrs Laurence A. Nelson, was planning the christening ceremonies for her son, born two weeks ago. At the same time another daughter, Miss Evalyn Johns, was making arrangements for her marriage to Elmer H. Nelson, a brother of her sister's husband. Mr. Johns had taken great interest in the plans for both ceremonies. After her husband's death, Mrs. Johns asked that both services be performed at the side of the coffin just before the funeral. All approved the plan and the widow's request was carried out Wednesday afteroon.

That seems like lots of details about the Johns and Nelson families, but census data doesn't immediately find them.